I missed you all yesterday ! Unfortunately there was BIG problems in the tiny house !
I will just start from the beginning !

Yesterday was Noah’s birthday all he wanted for his birthday was this girl, miss Puurcilla 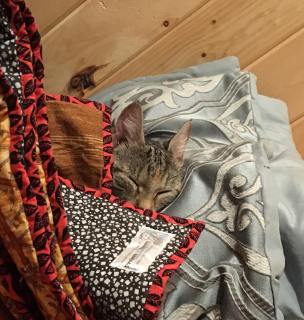 Noahs not a big party guy as you may have guessed so instead we went for a hike.

We had a blast throwing rocks in the water and hunting for just the right piece of drift wood for a project in the tiny house.

There it is ! We found the perfect piece ! I will show you what I did with it later.
After we went to get Noah’s cake ( It was what he wanted and it was his birthday after all !)

We had a wonderful day so we settled in for the night. I got ready to do some blogging and kicked back in my chair on the porch. Noah wanted to spend time with his new kitty.
I haven’t mentioned this here yet but last week Noah had heart surgery.

He was a champion and did a great job. In the realm of heart surgeries his was among the safest. He had a PDA repair ( a hole between his heart and lungs). We went in on Monday and was home by Wednesday.
So back to what I was writing. So I’m sitting on the porch powering up my laptop when I heard Noah getting really rough with our little kitty. I let out the mom yell “KNOCK IT OFF !! LEAVE THAT POOR CAT ALONE” and everything went quiet. I assumed Noah had jumped on his tablet (usually the only time he’s quiet) . After a few minutes I decided to go in and just check.

I was not prepared to see what I was about to see….. as I came in I could see Noah’s little feet behind the coffee table, as I got closer I could see that he was unconscious lying on the floor. A thousand things went through my mind ! Was he breathing ?? Oh God please let him be breathing !!! YES he was breathing ! I call his name once, nothing, twice nothing. Oh God PLEASE ! The third time I called his name he sat straight up and started screaming !! I scooped him up and put him in the car and off to the hospital we went ( the hospital is 2 blocks from my house) I carried him in my arms still screaming into the ER franticly trying to get someone to look at him. The nurse took us directly into the first examination room and wanted to do vitals. I’m explaining what happened all the while trying to explain he has autism and does not like to be touched by strangers BUT we still have to do vitals. I’m telling the nurse that even though he wont let her do vitals she has to do them anyway. Its not that he WON’T let her do it, its that he CAN’T let her do it. He’s not being a brat he’s being autistic. Now because he won’t let the nurse do his vitals she assumes he’s healthy enough to fight her and off we go to the waiting room. So now I’m in the waiting room with a terrified kiddo who looks like he’s being a brat in the middle of a crowd of sick people who after 10 minutes were set to lynch us both. HE STILL HAD NOT HAD HIS VITALS DONE ! I could go on all night about this. In the end we did get in to see a doctor after 2 hours of drama in the waiting room and found out his heart was fine. The reason he had passed out was his new kitty had bit him, the new love of his life that could do no wrong had bit him when no one in his life had even been violent to him his precious little bundle had bit him. It was more than he could take and he passed out (my poor guy). BUT something very profound for me came from this experience. While we were waiting I had given Noah my phone to play with. He likes to make little video’s but this video shook me to the bone and brought me to tears. See what Noah saw last night….

View all posts by tinyhouseonthespectrum